OK so it turns out that I SUCK at decorating cookies! I had plans make something similar to the awesome River's pumpkin cookies, I bought a pumpkin cookie cutter and everything - but they still look like they have been up all night on the Special Brew!!

I did two with all chocolate icing but they looked so pants that I started to cheat and use chocolate chips for the eyes and nose. Also, despite putting a buttload of orange food colouring in the cookie dough, they are still just a very pale peach!

I attempted some chocolate ones but they failed even more spectacularly, because I ran out of a few things and had to improv! But on the upside I think that the chocolate dough I made will become part of a future recipe - I have an idea for it!

Gah, ah well, they taste nice which is what matters - right? 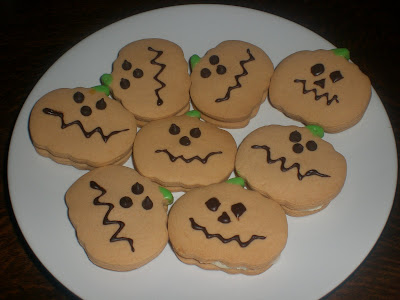 Happy Halloween everyone!
And goodbye MoFo!
Posted by Sal - AlienOnToast at 09:00