I decided not to go to the gym last night, as I'm going to be away with work from tomorrow night over the weekend, so won't really have a night to myself for a bit.  And because of this I decided to spend a bit longer making dinner. Also I thought my attack class was tonight and it was actually last night! haha oops, that's a fine I'll have to pay next time I book! :(
Anyways.... I went with the chickpea cutlets from Veganomicon.  I don't make these that often because I always think they take ages to make, but actually if you have all the ingredients, they really don't take that long at all.  I always bake them, I've tried frying like it says in the book but there is ALWAYS gluten strings inside when I've fried. And uncooked stringy seitan makes me wanna barf.  So oven it is.  But that's good because it gave me time to prepare and cook some mushroom gravy, broccoli, mashed potatoes and green beans.
The gravy was suuuuper easy.  Just sauteed up about half a cup of mushrooms with a shallot and a clove of garlic. Then added about half a cup of veggie stock and some thyme.  To thicken I mixed about a tablespoon of flour with a couple of tablespoons of soymilk, I added this in then stirred till it thickened.  I also (of course) added some nooch! A couple of tablespoons.  Quick, easy and yummy. 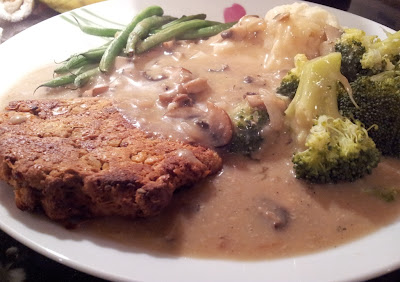 Leftovers make a great sarnie for lunch the next day by the way! 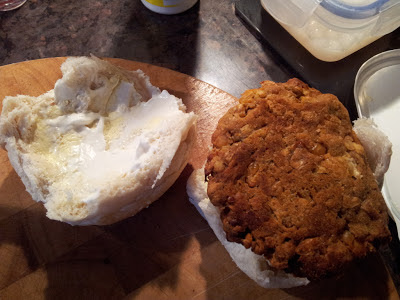 I also had a bit of an experiment fail, but I'm trying it again, so that is a blog post for the future!