Hey folks. So it's MoFo Day 2 and I was hoping to have some pics for you of awesome vegan foodz from the O2, as I went to see Nickelback there last night (shut it H8rs - they're awesome!!). Unfortunately we chose badly and ended up eating some rather crappy chinese food that I'd rather not remember.  So I dug into my camera and found some pics of a recent trip to london with my vegan ladybros.
Starting off with lunch at Pogo Vegan Cafe in Hackney.  I remember last time I went there it being an awful long trek in the rain after an awfully long bus ride to get there! But my friend Kip has skillz and it was much quicker this time.  We all had the punk burger meal, which is their house tofu burger with facon and cheezly.  The carrot salad I wasn't struck on, the other one had avocado in so that made me happy. Oh and wedges!﻿ 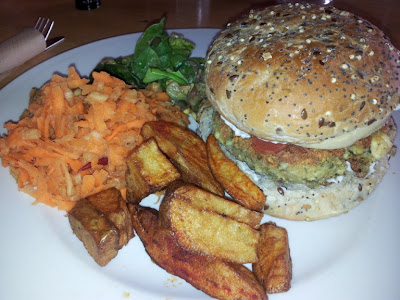 Inside shot - that is one fat wodge of cheezly right?  Yep.  It was superrad. 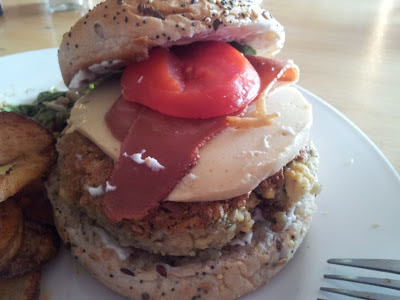 We decided after lunch to go to Soho and made a stop at Bubbleology so Kip could get bubble tea. As I've always been curious, I decided to get one too.  They don't advertise it but apparently the whole menu is vegan!  I picked coconut flavour and I LOVED it.  In fact I loved it so much I have bought some tapioca pearls in the hope that I can make some cack-handed effort to recreate it!  Watch this space.... 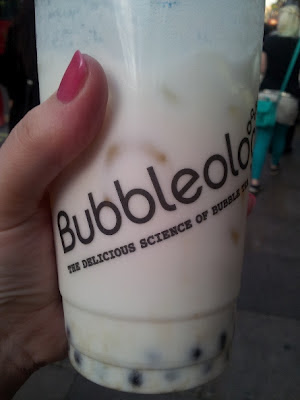 We also went to Ms Cupcake in Brixton and I got a cherry coke flavoured cupcake which I shared with my friend the next day.  It was pretty, unfortunately it wasn't that great - a bit dry and just not really my cup of tea.  But I have never before had a bad item from Ms C so I'm willing to bet this was a one-off. I knew I should have gone for that blueberry one! ;0) 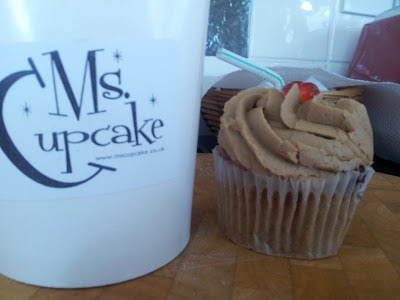 Have a great day all.