Ha! This post is actually about pasta but I got your attention didn't I? Dirty birdy.  Anyway, it does also involve balls so don't be too disappointed.

I am a bit unprepared for MoFo if I'm honest and the last couple of days I haven't really cooked anything exciting.  So I'm doing a bit of a grocery shop later so that I can change that.  But for today, here are a couple of pasta dishes that I made recently that were on my phone.  The second one was actually yesterday's dinner, so I don't feel too bad about this post.

This one is some spaghetti with tempeh BALLS (recipe in this post).  The sauce on the pasta was pretty simple, just some Sacla Aubergine Pesto and some nooch.  It was good and not too time consuming to knock up. And easy as balls! ha, see what I did there! 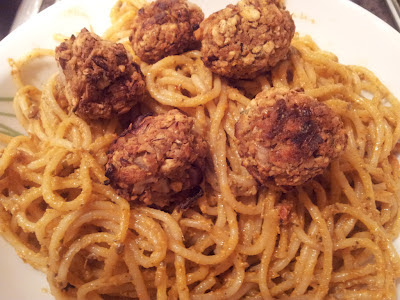 Last night's tea.  Mondays and Tuesdays I have salsa classes in the evening so I always have to have something quick, unless I've had the foresight to make something with leftovers* the night before.  But as my smaller clothes I bought last year are feeling tight again, I wanted something that was still healthy if possible.  So this was just a quick dish of some wholewheat penne, broccoli, green beans, sweetcorn, tomatoes from my dad's friend's garden and some smoked tofu.  The sauce was a bit of pasta water and some tesco dairy free cheddar style spread and a crap-tonne of nooch.  It was easy and good, but when I was eating it, I was wishing I'd put some sriracha in there too! 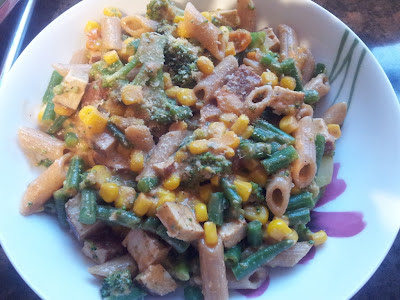