AND that was the time from starting cooking to when it was in the bowl and the foofy piece of basil was on the top!! (Normally I stop the timer when I turn off the stove etc so it doesn't include plating up time.)


So for the penultimate veganised Jamie meal of this year's MoFo, I made... 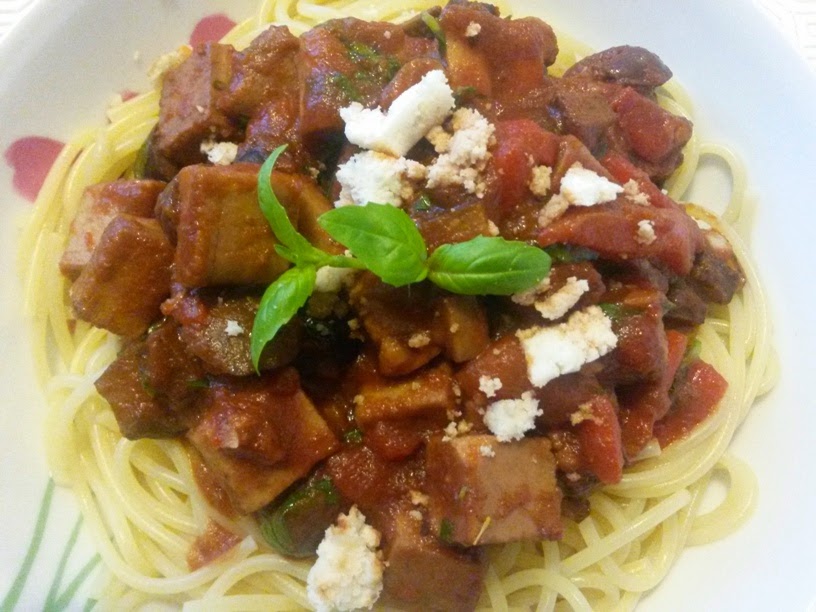 So this was pretty good!  I won't lie, it's not the most inventive thing I've ever eaten and I often make something similar. But it was a nice change to pasta bolognaise etc. It was super easy to veganise and as you can see, really effin quick to cook! The pasta sauce can be made in about the same time as it takes the spaghetti to cook.

Recipe Link: The actual recipe isn't on Jamie's site (an older non-15 minute meal one is), so here's a link to the one someone else has posted.

My Substitutions:
- I subbed RealEat Chicken pieces for the chicken*
- I subbed a finely chopped hemp space bar for the smoked pancetta and added a pinch of smoked paprika
- I subbed whatever red wine was open for the chianti (I think it was merlot, I don't drink red so I have no clue)
- I used all chestnut mushrooms
- I left out the anchovies
- I used dried rosemary instead of fresh
- I used regular spaghetti instead of wholewheat
- I used the last of my almond feta from THIS post instead of parmesan!

Phew! that's quite a few subs, but nothing that would majorly change the flavour I think!

*I used fake chicken pieces but if you're not vegan/veggie and making this for someone who is but don't want to buy these, I think you could totally use canned beans (such as cannelini) and this would be good!

Overal Verdict: Not mind blowing but still very tasty and I love how easy and quick it was. AND no food processor or 10 gazillion pans to wash, just a knife and two pans! WIN.

I should probably branch out from chicken for the last one, huh? HAHA

Have a great weekend everyone.  Who's going to Vegfest (London) tomorrow?  If so, maybe I'll be lucky enough to run into you! :)